Deprecated: Methods with the same name as their class will not be constructors in a future version of PHP; OPML_Import has a deprecated constructor in /home/phallume/public_html/wp-content/plugins/opml-importer/opml-importer.php on line 37
 Groundation: The Rastafari delegates that brought the Emperor – Phallu Ras Sound

My WORD, my SOUND, my POWER

Groundation: The Rastafari delegates that brought the Emperor 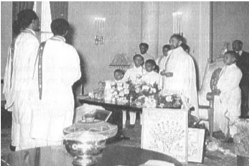 In the late 1920s, a new spiritual vibration began to spread, to the descendants of Afrikan Prisoners of War that was carried beyond (Caribbean) onto the island of Jamaica. Tired of the colonial way, an individual, named Leonard Howell carried a news paper clipping of the Ethiopian Monarch Negus (King) Ras Tafari who in 1930 was crowned with the biblical accolades and titles King of Kings, Prevailing Lion of Judah, and the Elect of God. His Imperial Majesty Emperor Haile Selassie the First, stood bright for the world to see as one of the most decorative and significant coronations that the world through the medium of the media has ever seen.

The Jamaican people who were taught from a Negro Slave bible, that excluded the book of Revelations or any verse that would incite rebellion or revolution of the European enterprise were placed in chains mentally and physically and began to see redemption through Haile Selassie I. A collective of people who have mixed their indigenous spirituality with Christianity, through the veneration of the ancestors, opposing the colonial laws placed on the island, got hold of the full bible, studied and would read that the revelatory verse that the Messiah’s hair was like wool and feet like burned brass, fed their spirit. Rastafari began to threaten the Catholicism structure and the political operation of the island that many early Rastafari known as Howelites faced major persecution.

The leader of the Howelites, Leonard Howell who successfully built a community and developed their own version of Black Wallstreet from Oklahoma, USA village was burned down by the police through orders of the Jamaican government. Eventually, Leonard Howell was given the judgement of spending time in a mental asylum because of his idea of a black messiah, through the person of Haile Selassie I and was considered a lunatic. Nevertheless, Rastafari began to spread along with the abuse of its people by the orders of the Jamaican government increased.

In 1961, a few brave men from the Jamaican Rastafarian community, Douglas Mack, Mortimo Planno and Philomore Alvaranga, sponsored by the new Jamaican Prime Minister, Norman Manley, made an official visit to Ethiopia. The mission was to inquire about the Rastafarian community repatriating to Ethiopia through the land grant that Haile Selassie I has offered after the successful defeat in 1941 of the Italian occupation in Ethiopia.

On Friday April 21st, Haile Selassie was ecstatic to meet the delegation, that after the formal meeting, the Emperor conducted an informal discussion in English with them. Brother Douglas Mack records in his book, “From Babylon to Rastafari” that Haile Selassie shared that the Jamaicans and Ethiopians are blood brothers, providing confirmation towards their innate identify as being Ethiopian.

After the trip the delegates took a tour to a few Afrikan countries like Nigeria and Ghana. In Enugu, Nigeria Dr. Michael Okpara apologized to the delegation for his ancestors of the Ibo people who used to sell their brothers in slavery to the west and mentioned that in Ibo law, if anyone traces their lineage back to the tribe, would be received and pray that all is forgiven. In Ghana, Nii Amoo Nakwah II, the Obtobulum Mensah, 90 years old at the time, remembered when slaves were leaving Ghana through agreements made between the Ghanaian chiefs, the Portuguese and the Dutch. In 1955 Ghana made provision to issue free land for immigrants and members of the Jamaican Back to Africa delegation with President Dr. Kwame Nkrumah.

As they embarked back to Jamaica, they returned to the harsh reality of the persecution of Rastafarians on the island. After a tragic event where Rastafari people where blamed, the government issued a statement, “BRING IN ALL RASTA DEAD OR ALIVE”. This would spark the event at Coral Gardens known as Bad Friday, which happened on the Christian Holiday, Good Friday, in 1963.

In November of 1964, the Rastafari delegates earnestly returned to Ethiopia for a follow up meeting about repatriating. Haile Selassie I hosted them with an extended stay in Ethiopia to see what life is like in Ethiopia. The delegates asked if HE can visit Jamaica, and with excitement said yes.

In April of 1966, 3 years after the Coral Garden incident, Haile Selassie I came to Jamaica, and was met with a large crowd of people to welcome HIM. He also defended the Rastafarian belief by refusing the Jamaican parliament offer to correct their belief, he instead offered Jamaica the opportunity to be part of the OAU (Organization of African Unity) but unfortunately could not be part of it. His visit was known as the day of Groundation, a Rastafarian Holiday, which wouldn’t have been possible if not for the Rastafari Sages, known as Douglas Mack, Mortimo Planno, Philmore Alvaranga and Brother Samuel Clayton due diligence in requesting the Emperors presence.

Since the visit, Rastafari has grown a million plus strong ushering a strong appreciation for the Afrikan identity, that even Rastafari communities have been developed from the span of Ghana, South Africa up to Ethiopia. There are even Rastafari adehrents in Europe, Mexico, South America, North America and Asia. Through the works of the Rastafari Sages and the world renown musician Bob Marley, Groundation is observed every year on April 21st.